If you have the actual xray-connector.hpi file,

Since version 2.1.0, you can install the plugin by using the Jenkins native Web UI. You can read more about how to to it here.

To add a new Jira instance connection, you need to specify some properties:

Note: the Configuration ID is not editable. This value can be used in the pipelines scripts.

The project is where the work that should be performed by Jenkins is configured.

For this app, you can configure:

In the home page, clicking for example New Item > Freestyle project, provide a name, and then click OK.

Build steps are the building blocks of the build process. These need to be defined in the project configuration.

This build step will export the Cucumber Tests (i.e., Scenario/Scenario Outlines) in .feature or bundled in a .zip file. The rules for exporting are defined here.

Some fields need to be configured in order to export the Cucumber Tests. As input, you can either specify issue keys (see the endpoint documention here) or the ID of the saved filter in Jira.

It supports importing results in Xray's own JSON format, Cucumber, Behave, JUnit, and NUnit, among others.

Using a glob expression, you can import multiple results files in the following formats:

For those formats, the file path needs to be relative to the workspace.

Depending on the chose test result format and endpoint, some additional fields may need to be configured.

Since version 2.2.0, the Xray plugin will now set some build environment variables according to the operation result after each of the Xray Steps mentioned above. 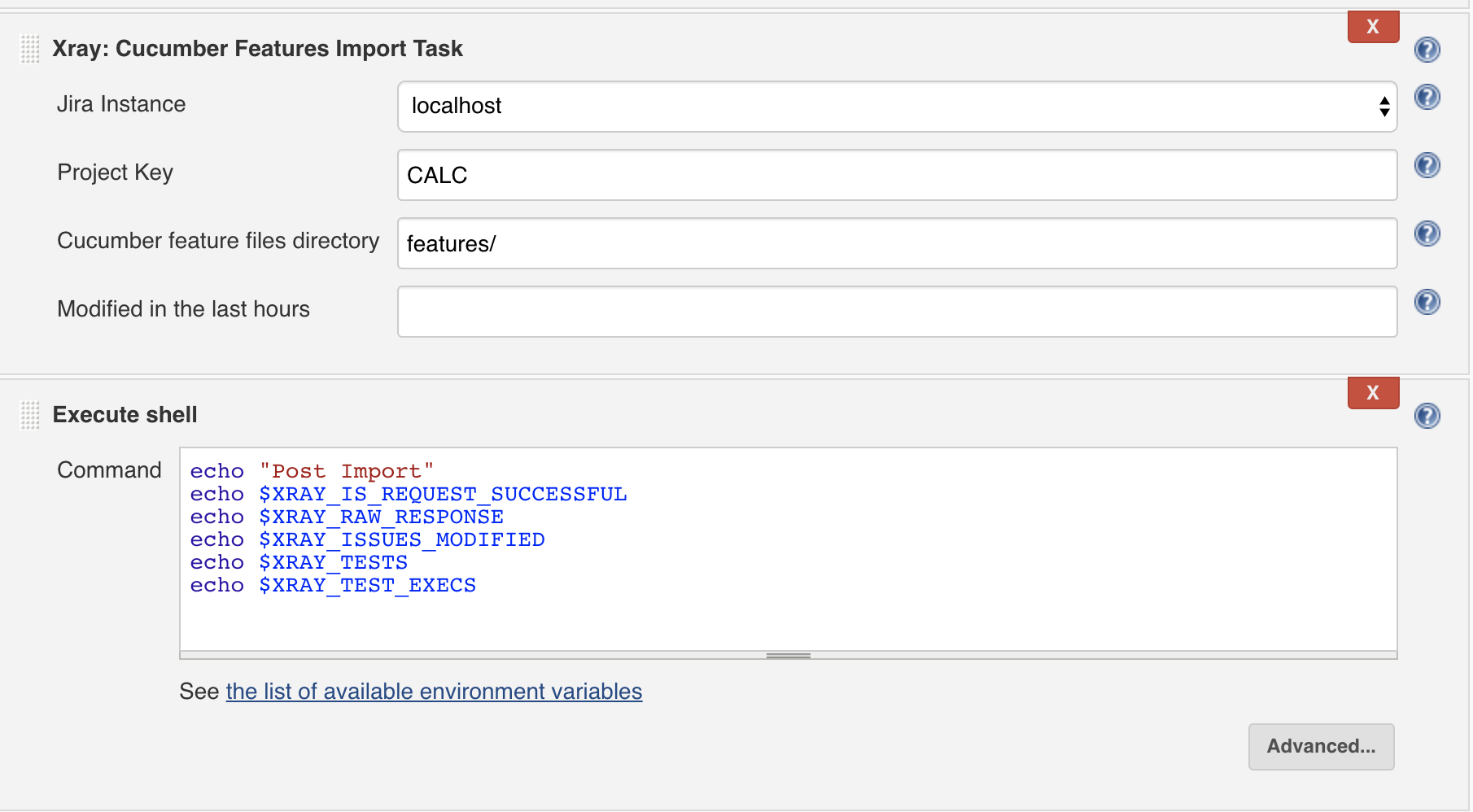 In a typical Cucumber Workflow, after having created a Cucumber project and the Cucumber tests specified in Jira, you may want to have a project that exports the features from Jira, executes the automated tests on a CI environment and then imports back its results.

For this scenario, the Jenkins project would be configured with a set of tasks responsible for:

In this example, we configured the task to extract the features from a set of issues (PROJ-78 and PROJ-79) to the folder that holds the Cucumber project. 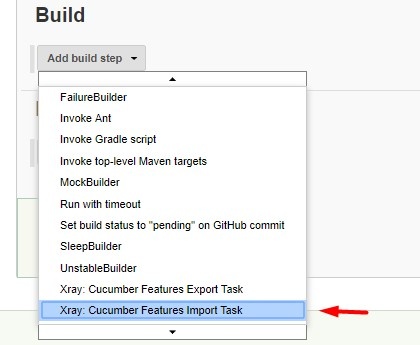 In this example, we configured the task to import to the Project IF of the Xray instance all the .features and .zip files that are contained in \Cucumber directory and sub directories, which were modified in the last 3 hours.

In this example, we configured the task to import the Cucumber JSON results back to Jira.

Once all configurations are done, click Save at the bottom of the page.

After running the job, the expected result is a new Test Execution issue created in the Jira instance.

For Cucumber, Behave, JUnit, Nunit and Robot, Xray for Jenkins allows you to create new Test Executions and have control over newly-created Test Execution fields. You can send two files, the normal execution result file and a JSON file similar to the one Jira uses to create new issues. More details regarding how Jira creates new issues here.

For this scenario and example, the import task needs to be configured with the Cucumber JSON Multipart format. When selecting this option, you can additionally configure the Test Execution fields in one of two ways:

In this example, we configured the following object:

And configured the task to import the Cucumber JSON Multipart results back to Jira.

Once all configurations are done, click Save at the bottom of the page.

Apart from supporting Cucumber natively, Xray enables you to take advantage of many other testing frameworks like JUnit. In this sense, Xray for Jenkins lets you import results in other formats besides Cucumber JSON.

If you want to import JUnit XML reports, a typical Job outline would be:

In this example, we have a configuration where the JUnit XML format is chosen.

After running the plan, the expected result is a new Test Execution issue created in the JIRA instance.

You can also import multiple results using a glob expression, like in the following example

Xray for Jenkins provides support for pipelines projects, allowing you to use Xray specific tasks.

There are 3 available steps to be used in a Pipeline project:

This is a declarative example, for Cucumber tests using the "standard" workflow (see Testing in BDD with Gherkin based frameworks (e.g. Cucumber)).

This is a declarative example, for Cucumber tests using the "VCS/Git based" workflow (see Testing in BDD with Gherkin based frameworks (e.g. Cucumber)).

You can automatically generate your step scripts using the Jenkins Snippet Generator.

This is the simplest way to generate your step script, and we strongly recommend the use of this snippet due to the complexity of some task related parameters.

If you use a containerized version of Jenkins, or simply want to avoid creating the Jira configurations manually (using the Jenkins UI), you can use the following script in the Jenkins Script Console.

To use the script below, you just need to modify the contents of the instances and deleteOldInstances variables.

The build process is failing with status code 403

When you check the log, it has the following:

By default, when you successively try to log into Jira with the wrong credentials, the Jira instance will prompt you to provide a CAPTCHA the next time you try to log in. It is not possible to provide this information via the build process, so it will fail with status code 403 Forbidden.

You will need to log into Jira via the browser and provide the CAPTCHA.

If you obtain this error, probably you have migrated from an old version of this plugin. You need to open each project/job configuration and save it.