xUnit is a testing framework for .net languages (e.g. C#, F#, VB.NET) mostly focused in unit testing but that can also be used for integration testing.

In xUnit, you have Tests and Collections. A Collection is a way of aggregating a group of tests, along with their results.

There are 2 types of tests in xUnit:

Both of this types of tests are treated similarly by the results importer.

Below is a simplified example of a xUnit XML report containing a Collection with two Test Cases. 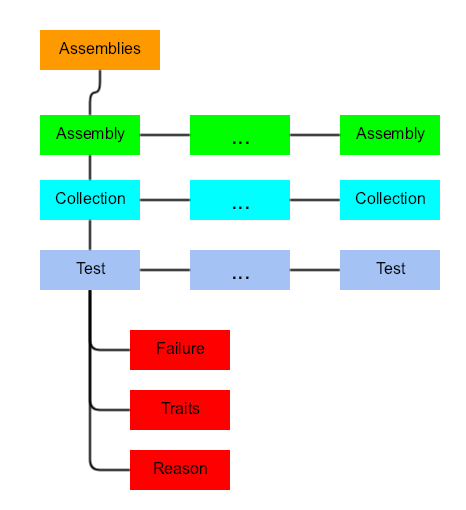 xUnit’s Test Cases are identified by the pair of attributes “type” and “method” attributes.

If a Test already exists with the same Generic Test Definition, then a duplicate is not created.

Parameterized Tests are imported to the same Test Run, where each set of parameters is identified by a different context.

xUnit’s Test Suites are not mapped to any special entity. However, the execution details screen will show the Test Suite related to a specific test result.

Mapping of fields from the report to the Test issue

The status of the Test Run will be set based on the attribute result of the Test:

Note: Test Cases with the status FAIL may have an error/failure message, which can be seen in the Test Run screen, under the Results section.