The Xray for JIRA team announces the release of Xray 2.3.0. Version 2.3 contains new features as well as bug fixes. Please check the highlights below.

Highlights for this release

This report shows a list of Test Runs with detailed info for each one, including related Test, Test Execution and Test Plan entities, execution dates, linked defects among other.

The Test Runs List gadget will provide the ability to include Test Runs in your JIRA dashboards and in your Confluence pages. Thus, listing all the Test Runs of a given Test Execution or the ones assigned to/executed by a given user will be straightforward. 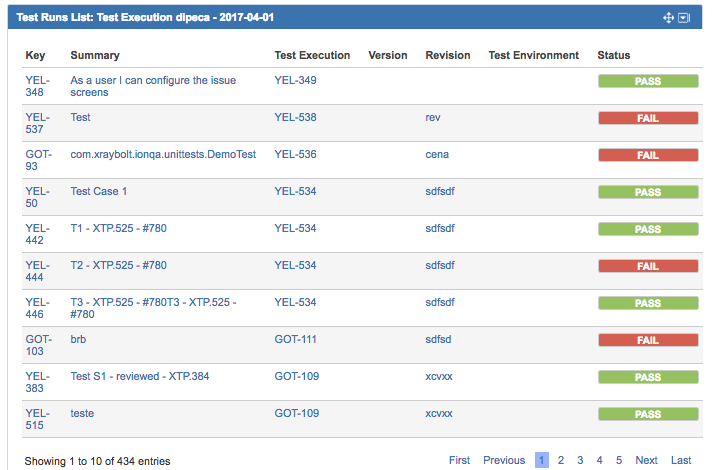 Import Tests with attachments with the Test Case Importer

Day after day, people come from legacy tools and want to use Xray straightaway in order to improve their QA. We know that test cases normally have one or more attachments that complement the specification of each test.

To simplify the migration to JIRA and to Xray, the built-in Test Case Importer now supports adding attachments both at step level and globally at Test level. Attachments may be imported locally from a JIRA server folder’s directory or from remote URLs.

One or more attachments may be specified and this can be done either at the Test level, in the Test’s first row, or at the step level in the subsequent rows.

For new Cucumber imported results, you will be able to see attachments in-context, at step level. This applies also to Cucumber hooks.

We understand that you may need to extract and process your reports further.

The Test Plan tracks  a group of Tests in a given version. However, you may want to know what requirements are being covered by the Tests that are part of a given Test Plan, in order to answer the question “What requirements am I validating?”. The testPlanRequirements() JQL function provides exactly that, for one given Test Plan issue key or for a list of Test Plans, by specifying a saved filter as argument.

Likewise, the requirementTests() function was improved to support a saved filter as argument. Thus, you can now easily obtain all the Tests that cover a certain group of requirements.

The new testPlanTestExecutions() function provides all the Test Executions for a given Test Plan issue key.

New Features and Bug Fixes in this release